About the Controlled Exposure Facility Core

The Controlled Exposure Facility (CEF) Core provides expertise and facilities to conduct human and animal exposure studies. The Core is comprised of two technology units overseeing exposure chambers that individually provide controlled atmospheres to human subjects or small animals. The controlled environmental chambers share components of the pollutant generation systems, allowing for exposure conditions that mimic those encountered in both environmental and occupational settings. The goal of the human exposure unit is to provide accurate exposures of human subjects in a setting where many host and environmental factors can be rigorously controlled and where biological specimens can be collected for discovery of biological response indicators and mechanistic studies. The animal exposure unit provides consultation for conducting animal inhalation research in controlled exposure conditions corresponding to those in the human exposure chamber. The ability to generate different atmospheres with known pollutant concentrations in a controlled environment allows testing and calibration of devices that will be used for field and epidemiological studies.

The Core provides expertise, facilities and training in conducting translational research involving controlled exposures. Animal models are often a valuable experimental alternative to identify biological response indicators of biologically relevant exposure and/or incipient disease. Once identified in animal models, such mechanistically-linked markers can then be tested and validated in human studies. Likewise, biological response indicators identified in humans can translate to more experimentally tractable animal models to gain further insights into their roles in disease susceptibility, pathogenesis and their use as targets for interventions.

The animal exposure unit CEF addresses a significant need within the Center and recently the CEF staff has expanded its capabilities in designing controlled inhalation exposures for rodent studies using similar pollutant generation systems, but in a separate animal chamber. These new capabilities allow for direct comparison of results from human and animal studies, leading to development of more representative animal models. The expansion of the Core capability to include animal exposures is particularly important to the studies of the Environmental Cancer and Diseases of the Integument Core, as the latter use compounds that are carcinogenic and/or too toxic for human experiments. Thus, results obtained from the studies supported by the animal unit of the CEF Core are critical for linking the laboratory findings with controlled human studies, and eventually epidemiological research and intervention studies. Such information can help better understanding the mechanism underlying environmental exposure and adverse health effects.

The primary goal of the CEF Core is to provide investigators assistance in design, performance and analysis of experiments requiring the generation of gaseous and particle atmospheres at levels relevant to environmental and occupational exposures, including:

The CEF is used for both human and animal studies and has adjacent lab space for mixing and generating various exposures. The facility is also connected directly to a diesel generator in the EOHSI facilities room from which fresh diesel exhaust can be diluted and piped directly into the exposure chamber. The CEF has three major components: 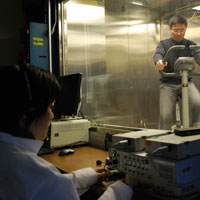 The first funded study using the CEF was conducted in the mid-1990’s by Lioy and Fiedler (Cardiopulmonary and Neurological Disease Cores, respectively) to examine effects of exposure to methyl tertiary butyl ether (MTBE) in a group of self-identified, chemically-sensitive individuals. The results from this study were used by the State of NJ and the Federal government to limit the levels of MTBE in gasoline to below 11%. Subsequent studies expanded the directions of these findings and the collaborative teams of Center investigators and the number of human studies in the CEF for human studies has continued to increase. These activities were accelerated by the acquisition of a diesel generator for use in a human study funded by DOD (Fiedler, PI, with Lioy and Zhang). Recently completed and ongoing studies requiring the use of the CEF Core include:

Recent studies funded by the Health Effects Institute (PI: Laskin) and NIEHS (PI: Laumbach) to examine pulmonary and cardiovascular effects in animals as a result of exposure to diesel exhaust. Technical consultations were provided by Turpin, Fan, Zhang, and Lioy for the implementation of these animal exposure studies. The diesel exhaust generation system, described above for human studies, was adjusted to the needs of an animal inhalation chamber. The diesel generator has a valve system designed to redirect the exhaust flow for the generator to an animal exposure chamber designed to allow parallel experiments. Diesel exhaust is mixed with dilution-filtered air and sampled isokinetically by a probe that pulls the diluted exhaust into the animal exposure chamber at a flow rate of 20 liters/min. Before mixing with diesel exhaust, dilution air is passed through HEPA filters and activated carbon cartridges to remove particles and volatile organics. Steady state diesel exhaust particle (measured as PM2.5) concentrations inside the animal exposure chamber between 100 and 1000 ?g/m3 are achieved by varying the flow rate of dilution air. The coefficient of variation for particle mass concentration was less than 8%. The aerosol entering the animal stable particle mass concentrations in the animal exposure chamber between 100 and 3000 µg/m3 can be achieved for up to 3 hr. More than half of diesel exhaust particles inside the exposure chamber are between 0.01 and 0.1 µm in size. Measurement of the composition of the aerosol used in animal studies is completed using the same variables associated with the characterization of the exhaust used in the human studies. Thus, there can be direct translation of the results from any animal studies to the results obtained in the human studies.